What is the Execution Context & Stack in JavaScript?

In this post I will take an in-depth look at one of the most fundamental parts of JavaScript, the Execution Context. By the end of this post, you should have a clearer understanding about what the interpreter is trying to do, why some functions / variables can be used before they are declared and how their value is really determined.

What is the Execution Context?

When code is run in JavaScript, the environment in which it is executed is very important, and is evaluated as 1 of the following:

You can read a lot of resources online that refer to scope, and for the purpose of this article to make things easier to understand, let’s think of the term execution context as the envionment / scope the current code is being evaluated in. Now, enough talking, let’s see an example that includes both global and function / local context evaluated code. 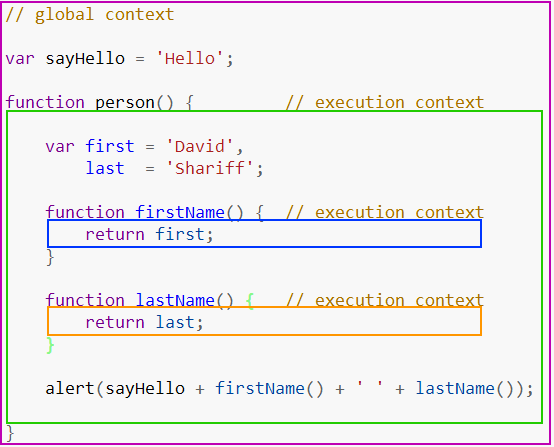 You can have any number of function contexts, and each function call creates a new context, which creates a private scope where anything declared inside of the function can not be directly accessed from outside the current function scope. In the example above, a function can access a variable declared outside of its current context, but an outside context can not access the variables / functions declared inside. Why does this happen? How exactly is this code evaluated?

The JavaScript interpreter in a browser is implemented as a single thread. What this actually means is that only 1 thing can ever happen at one time in the browser, with other actions or events being queued in what is called the Execution Stack. The diagram below is an abstract view of a single threaded stack: 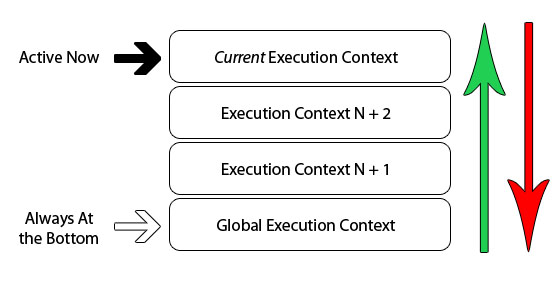 As we already know, when a browser first loads your script, it enters the global execution context by default. If, in your global code you call a function, the sequence flow of your program enters the function being called, creating a new execution context and pushing that context to the top of the execution stack.

The code simply calls itself 3 times, incrementing the value of i by 1. Each time the function foo is called, a new execution context is created. Once a context has finished executing, it pops off the stack and control returns to the context below it until the global context is reached again.

There are 5 key points to remember about the execution stack:

It is possible to represent each execution context conceptually as an object with 3 properties:

Here is a pseudo-overview of how the interpreter evaluates the code:

Let’s look at an example:

On calling foo(22), the creation stage looks as follows:

A Word On Hoisting

You can find many resources online defining the term hoisting in JavaScript, explaining that variable and function declarations are hoisted to the top of their function scope. However, none explain in detail why this happens, and armed with your new knowledge about how the interpreter creates the activation object, it is easy to see why. Take the following code example:

The questions we can now answer are:

Hopefully by now you have a good grasp about how the JavaScript interpreter is evaluating your code. Understanding the execution context and stack allows you to know the reasons behind why your code is evaluating to different values that you had not initially expected.

Do you think knowing the inner workings of the interpreter is too much overhead or a necessity to your JavaScript knowledge ? Does knowing the execution context phase help you write better JavaScript ?

Note: Some people have been asking about closures, callbacks, timeout etc which I will cover in the next post, focusing more on the Scope Chain in relation to the execution context.